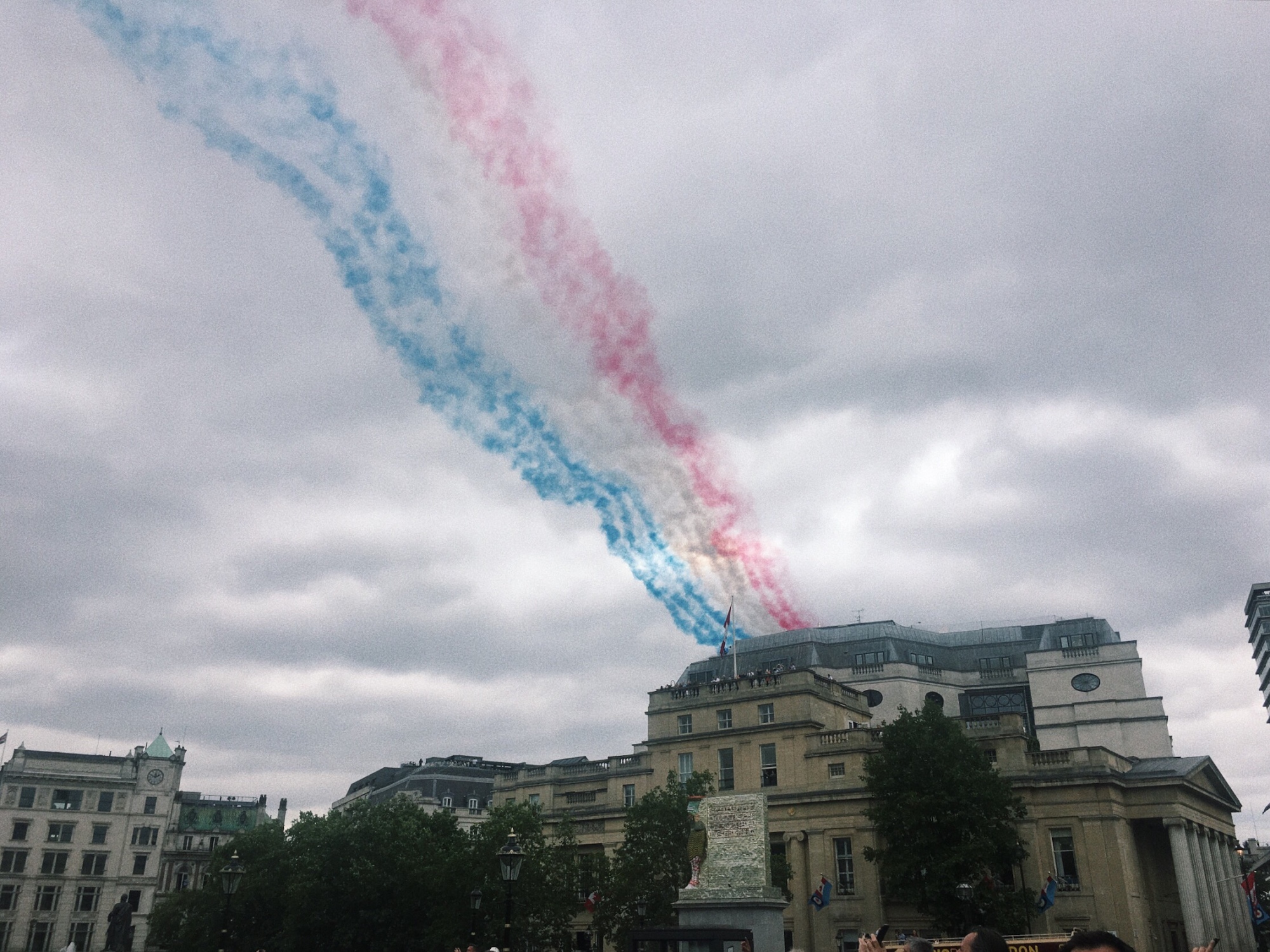 This morning I woke up at 9am. I had a breakfast of scrambled eggs and toast at the hostel before leaving for Covent Garden. Breakfast at the hostel was light because I was heading to Covent Gardens to try the Old Chang Kee curry puffs from their first ever UK store. But, as most stores in London seem to open only late in the morning, I had to chill at a nearby Starbucks first. 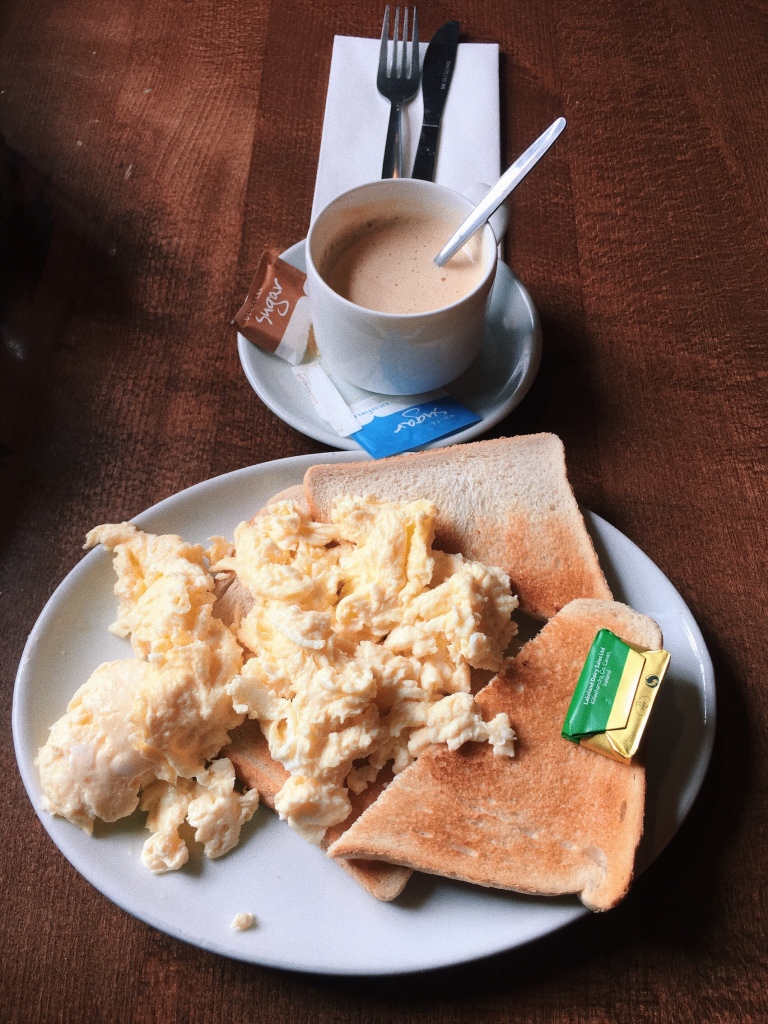 Eventually, at around 12pm, I finally got my hands on an Old Chang Kee curry puff! My god, it tasted the same as the ones back home. It’s pretty amazing how OCK managed to replicate the exact same taste almost halfway across the world. The curry puffs seemed to be a hit with locals as well, with a healthy stream of patrons exiting the store with curry puffs in hand. 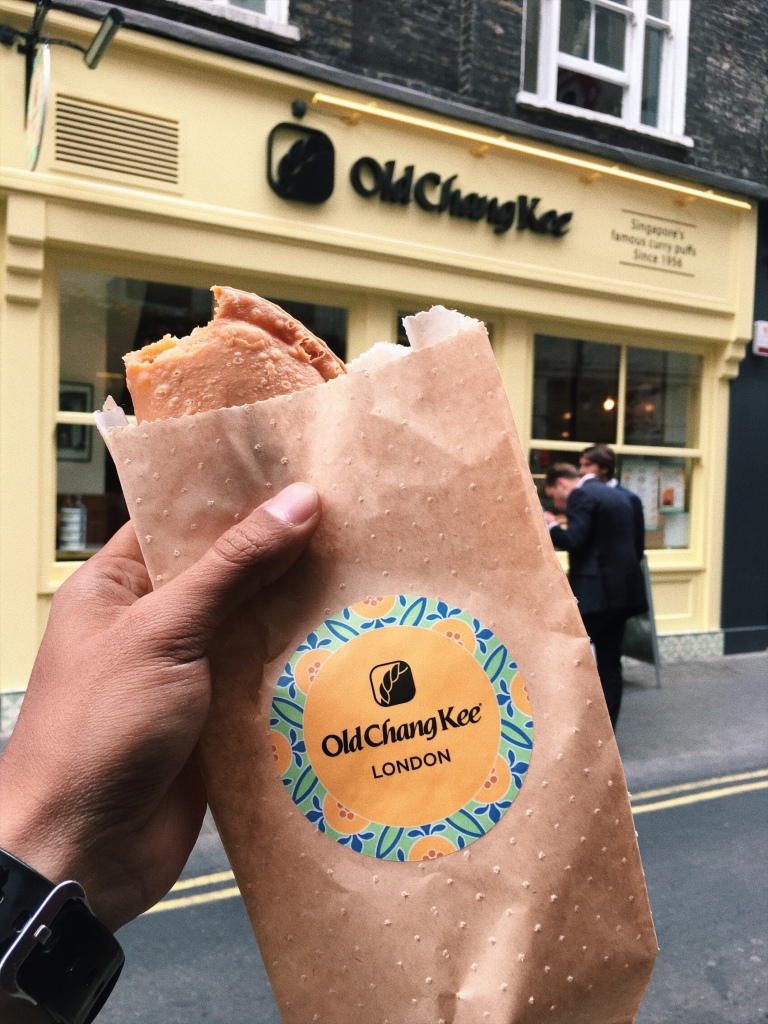 With my craving for a flavour of home satisfied, I headed to the National Gallery at around 12pm. The Gallery is one of the foremost repositories of art in the UK, and amazingly, admission is free. And, being located on iconic Trafalgar Square, it’s no surprise that the museum is one of the most visited in the UK, and even in Europe.

Busking on Trafalgar Square, the main entrance to the National Gallery. 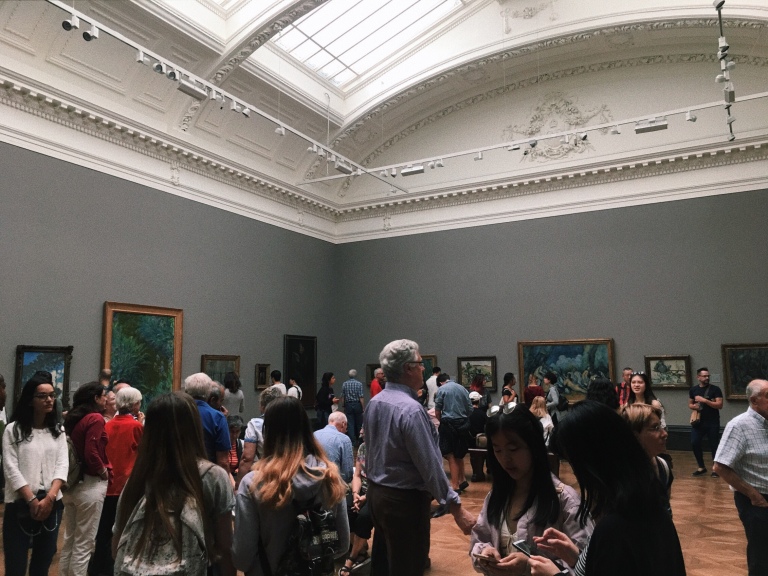 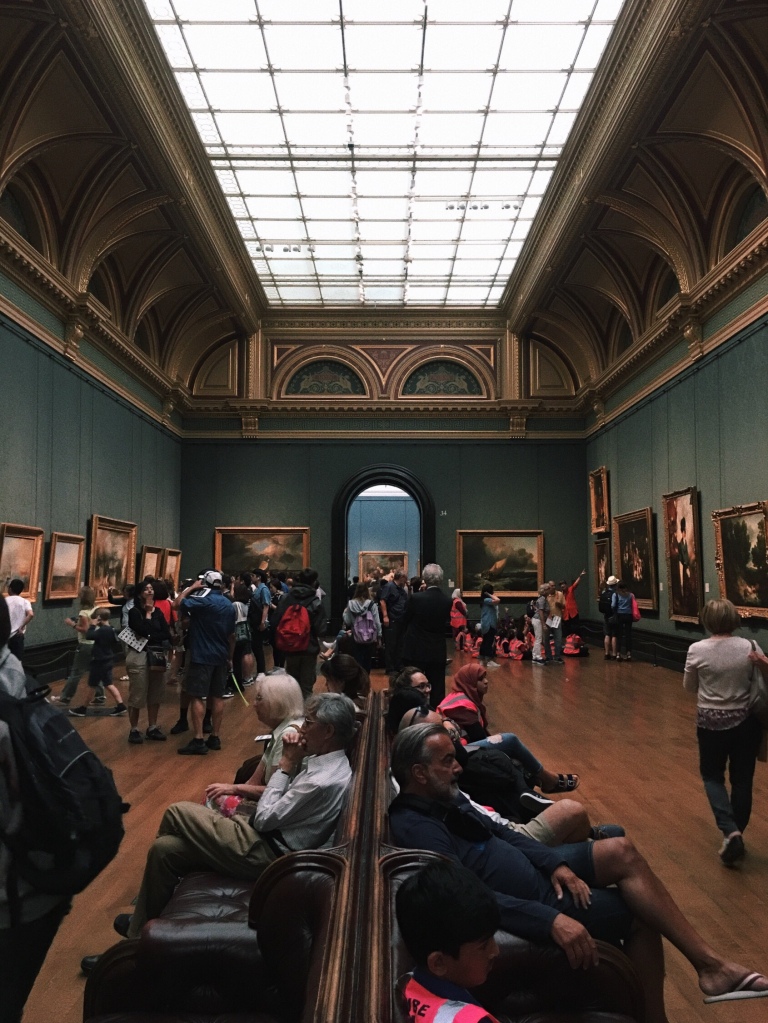 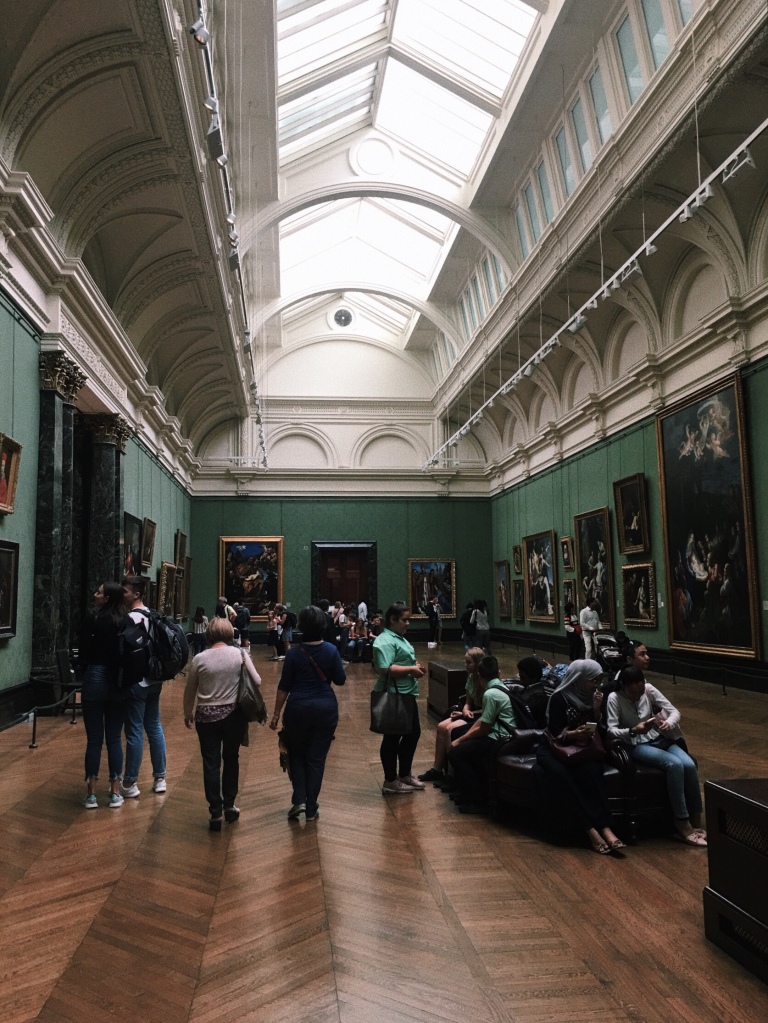 I decided to leave the museum at around 12.50pm, and immediately upon exiting to Trafalgar Square, I wondered why there were so many people in the Square. And strangely, they were all facing Nelson’s Column. About 5 minutes later though, my questions were answered as the first helicopter formations flew across the Square. There was a Royal Air Force flyby going on today to celebrate their 100th year, and I had been lucky enough to catch it. The airshow ended about 10 minutes later, and I left for my next destination. 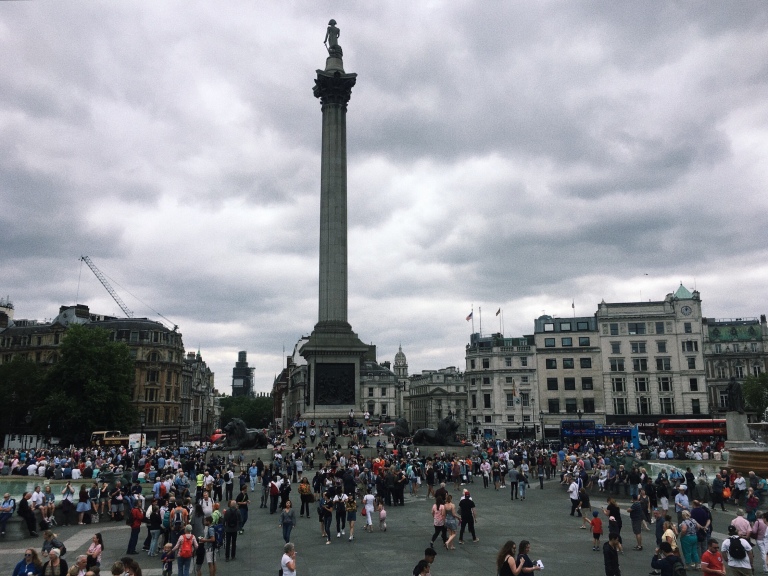 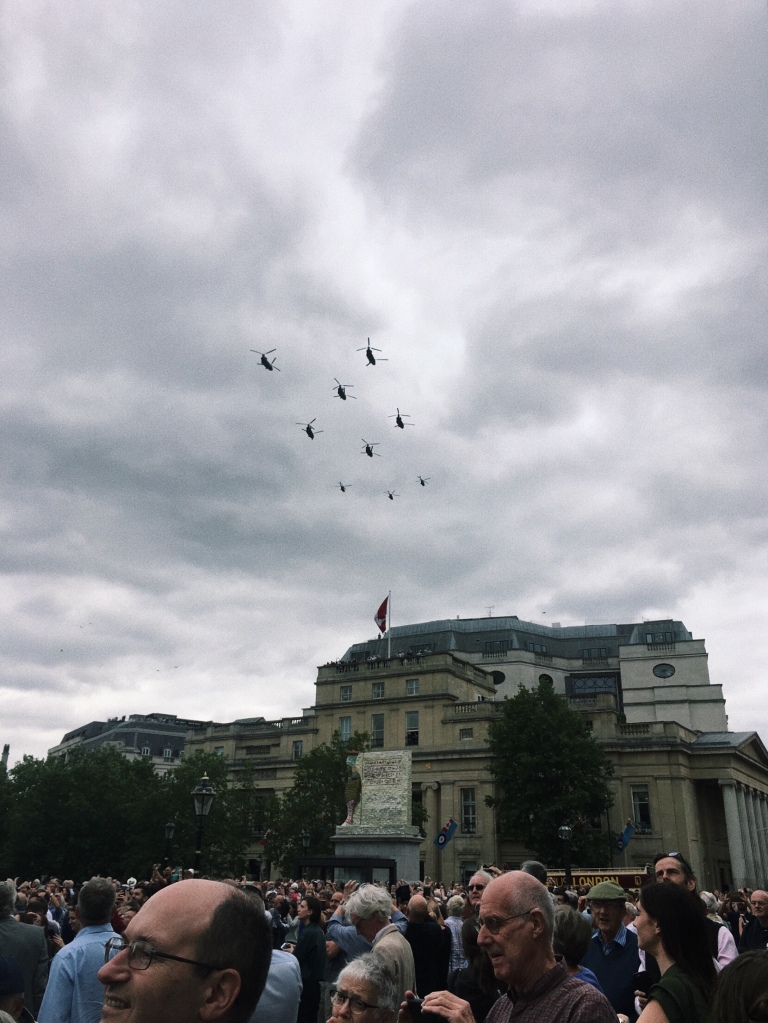 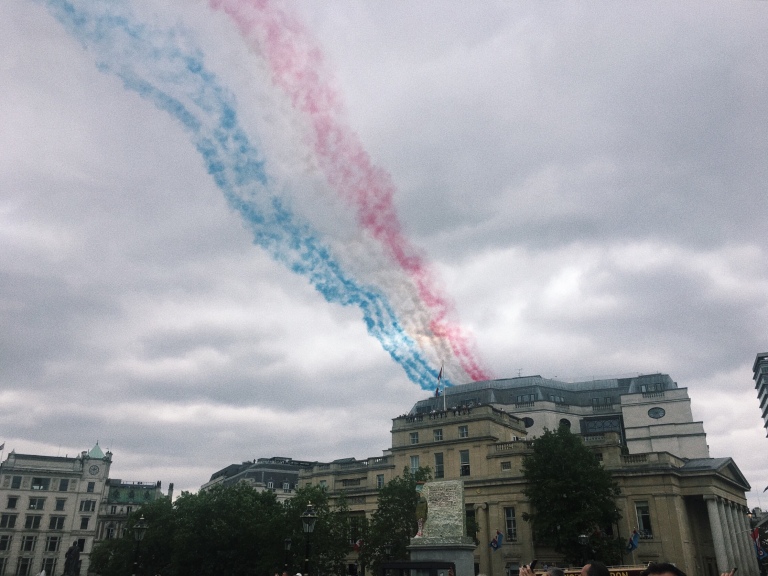 I arrived at the Tate Modern at around 2pm. The museum was housed in a former power station and probably had the largest collection of modern art on display in the UK or anywhere else in the world. Once again, like most British museums, admission was free! I felt that the choice of housing the museum in a former power station was rather fitting as the power station was really one of the hallmarks of modern civilisation. The large vacuous entrance hall really gives you a sense of scale fitting of the modern era: large, overbearing, and imposing at times. And accordingly, much of the artwork on display dealt with these themes: modern society and our place, our struggle, and our alienation within it. 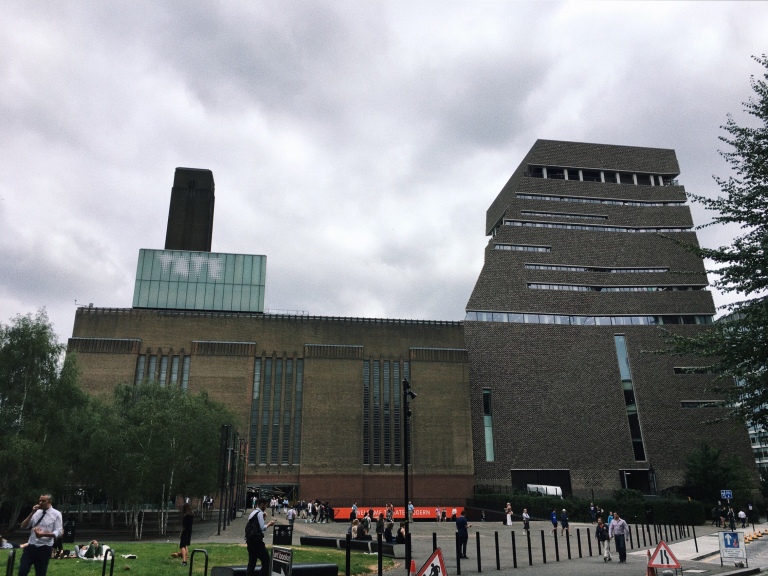 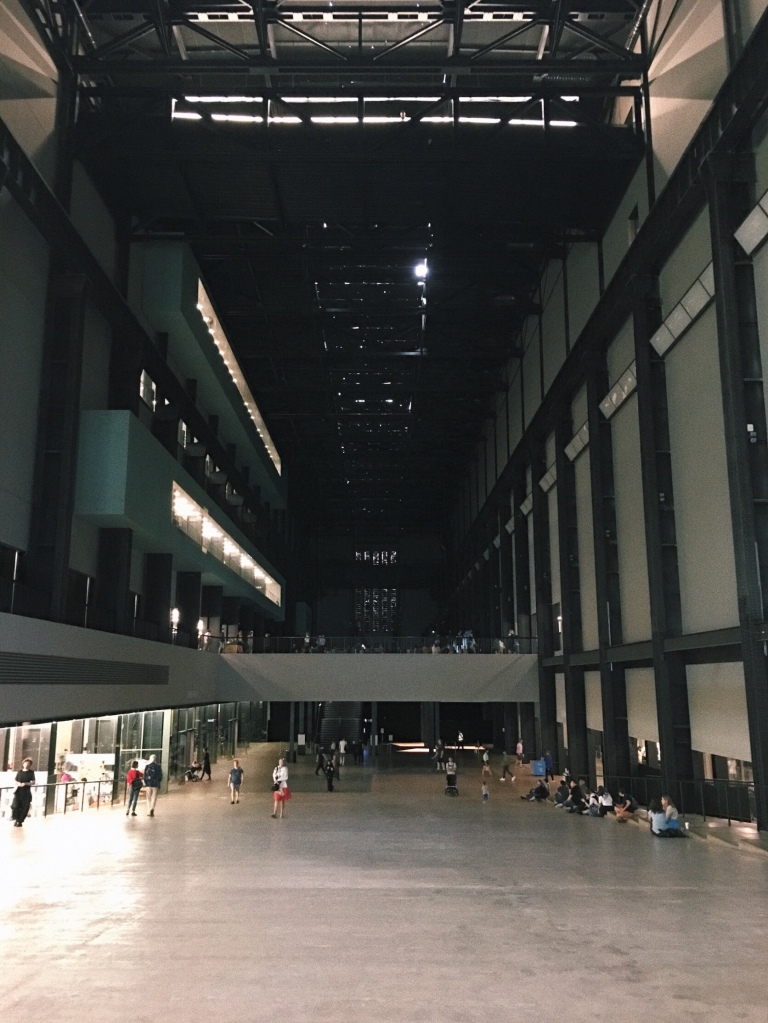 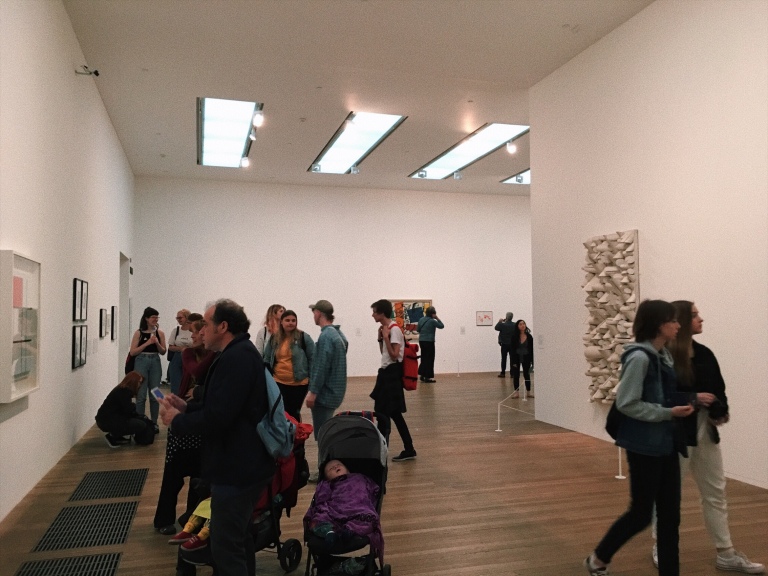 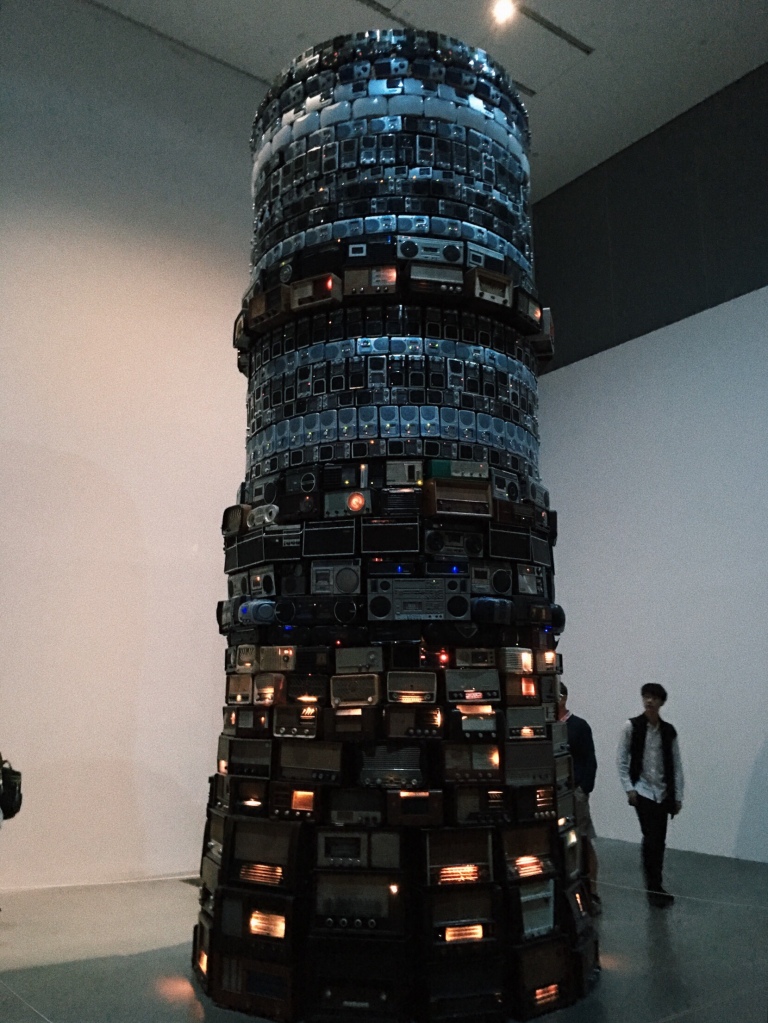 At 4.10pm, I arrived at Borough Market. The market sells fresh produce and fresh food from a wide variety of cultures. You’ll find most of the major Western cuisines here, as well as some Asian or Middle Eastern cuisines, like sushi or falafel. I ordered half a dozen oysters for starters, and I got a Boston-style burger for my “main course”. 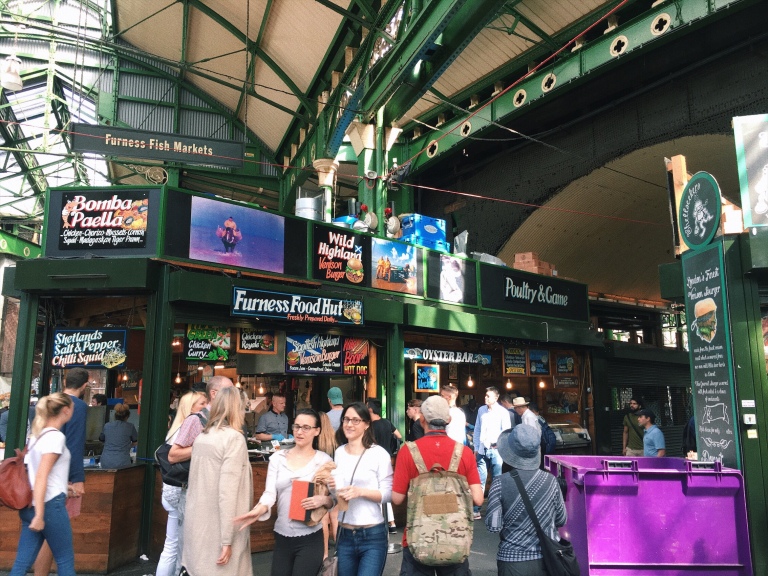 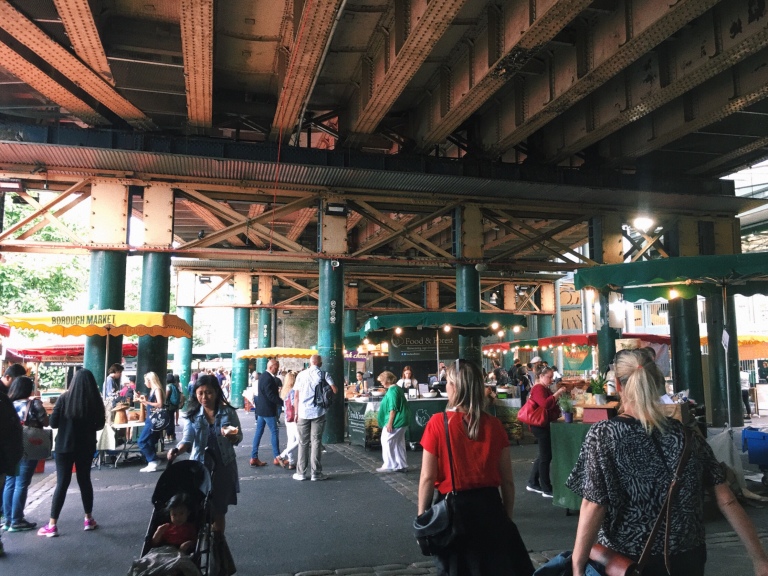 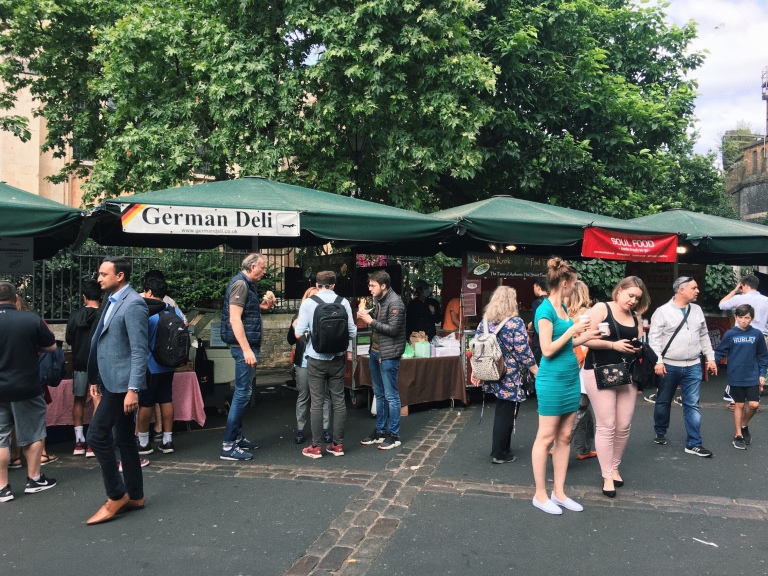 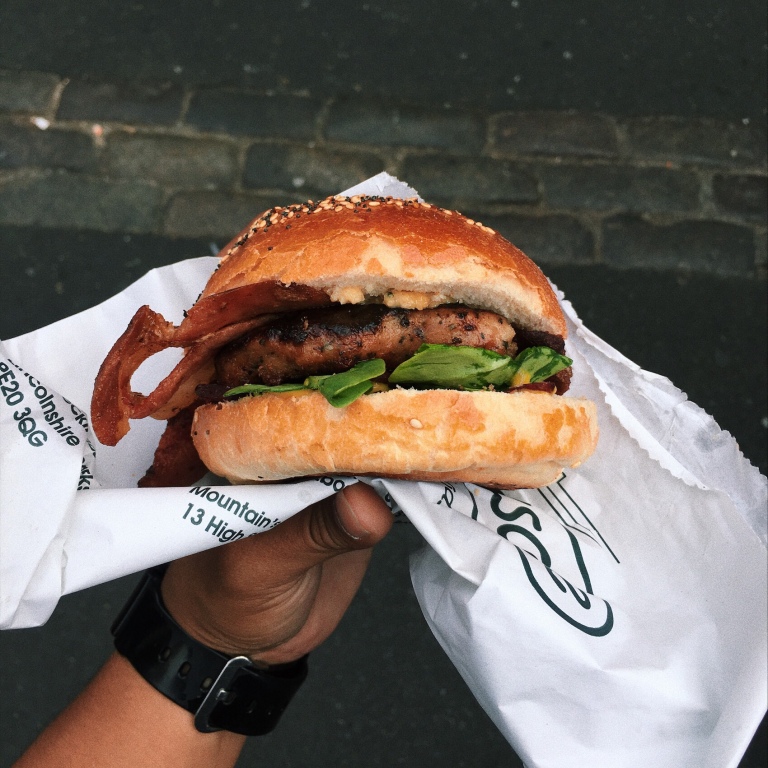 As I headed back to Paddington, I was caught in the evening rush hour on the tube. It was definitely a unique experience though, and I highly recommend getting caught in the rush at least once. Platforms weren’t packed, but the tiny tube trains were. We were delayed because the driver couldn’t fully close the doors. After warning of the closing doors and trying to close them three times, he finally spoke angrily over the PA system to us commuters. Something along the lines of: “I know some of you may find the instruction “stand clear of the doors” a bit difficult to comprehend, but door issues are the number one cause of delays on the tube”. 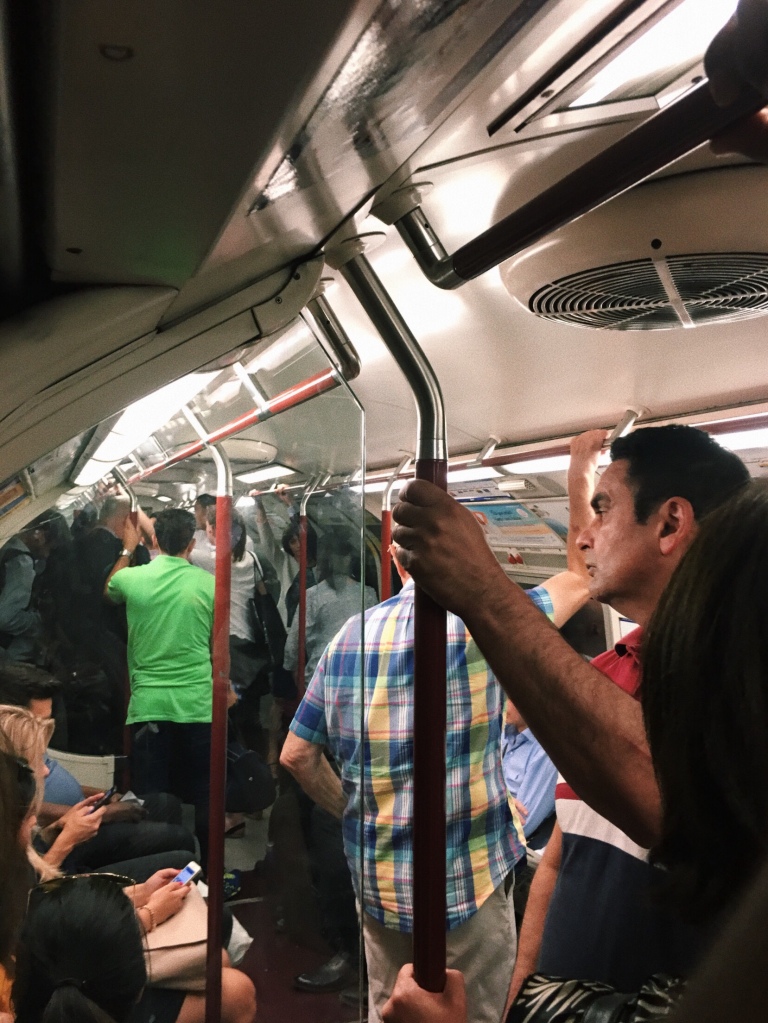 It seemed to work because almost immediately after, the doors closed without issue. Yet, almost immediately after we began to leave the station, the train ground to a sudden halt. Someone in the seventh carriage had pulled the emergency brake and we were stuck at the station for another 15 minutes. After we began moving again, the sarcastic tube driver came over the PA system again and said: “Not standing clear of closing doors is irresponsible, selfish, and causes everyone delays”. Sassy indeed.